The well recognized image used on the website, soap-bands, and other media related to CWF is one of Clayton Gunn and his dad George, taken on the Gunn property in the late 1930's.

The Gunn property, located in Weare, NH was originally purchased in 1896 by Richard's great grandparents Barney & Mary Gunn. Barney passed away in 1916 and Mary in 1936.  The property was then taken over by their son George and his wife Hazel, Rick's grandparents. This was during the depression era, when only their strength, determination and hard work carried them through.

In 1936 a tragic fire destroyed the Gunn farmhouse, barn and everything they owned, including cattle and working horses.

The years of 1936 & 1938 also brought hurricanes & floods to the area, causing more hardships for many.  A house and barn was dis-assembled and brought to the property from nearby towns where they were reconstructed.  Together George, Hazel and young Clayton carried on farm life and a milking business, selling to The Hood Company.

After returning from the war in the Pacific, Clayton took over work on the farm.  He in turn, married Edith and together they raised 3 children, Rick and his 2 older sisters Cathy & Carole.

The passing of Clayton Gunn in the mid 1990's left a bit of time when Edith maintained the Weare property before Rick & Sheryl purchased a portion of the land in 2010, and over the next several years built a new home, raised a barn, added farm animals, established gardens, and have become as self-sustainable as possible.  They also grow and harvest many of the herbs and flowers used in their soap.

The memory, spirit and integrity that Rick holds of his dad Clayton, and the heritage of 3 generations before him has been the inspiration behind Clayton's Way farm and the development of Clayton's Way Farm Soaps.  It is a shared family business, with Rick being the soap maker of over 50 varieties.  Sheryl enjoys creating the finished look of the product, setting up wholesale accounts, marketing, and is responsible for booking shows, and keeping up with the website. 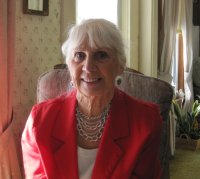 In the first years of business, Rick's mom Edie was responsible for wrapping almost 100% of the soaps before they went out the door (she is referred to as "the wrapper").  She also loved to attend events, make sales, and proudly share the history of the Gunn family.   Edie has an insatiable love for life, and is an inspiration to all who meet her.  Edie continues to provide support for the business, but we're sure is happy to have a back seat view, and not have dozens of boxes of soap at her feet waiting to be wrapped.